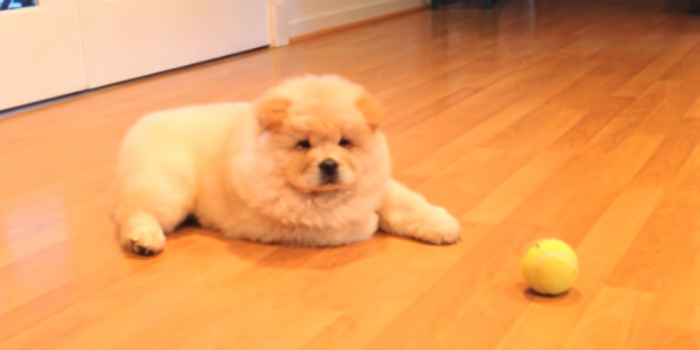 The Chow Chow puppy in this video looks so delighted just entertaining himself.  Who’d knew a tennis ball is all that’s needed to keep a puppy happy?  It just lifts my spirit watching this adorable fluff ball keep himself amused with something so simple.

According to Dog Time, some people think Chow Chow has a proud, independent spirit like a cat.  This dog is not that much of a cuddle buddy, but they are very loyal to you.  Chow’s mind their own business.  They’ll play with their family, and show no interest in strangers, unless the stranger approaches his home without his family’s invitation.  Then the Chow will challenge the stranger.  But if his family introduces him to a stranger, then the Chow will let the new person touch him.  A Chow Chow needs to be socialized a lot as a puppy so he feels relaxed and safe when he grows up.  You can do this by exposing a Chow puppy to new people, different dogs, new situations.

How are Chow Chow’s with children?

Chow Chow’s can be okay with children if they grow up with them.  It is best to place a Chow in families with older children who already understand how to treat a dog.  Chow’s are not very tolerant of children rough-housing with them.

Do Chow Chow’s need a lot of grooming?

If you have a Chow Chow, they need to be brushed around 3 times a week to keep their hair in good condition.  Get them used to being brushed as a puppy, and handle their paws often as a puppy to get them used to it, since dogs are funny about getting their feet touched.  Make it a positive experience when being brushed and getting their paws touched, so when they go to the groomers or vets, the transition will be much easier.

Where to adopt a Chow Chow

If you are looking for a Chow Chow, consider a rescue group.  Sometimes former owners may not understand what goes into caring for a Chow.  And sometimes their owners passed away, and they end up needing a foster home.  You can read more about Chow Chow’s here.  Enjoy watching these Chow Chow puppies going after a prized bowl.