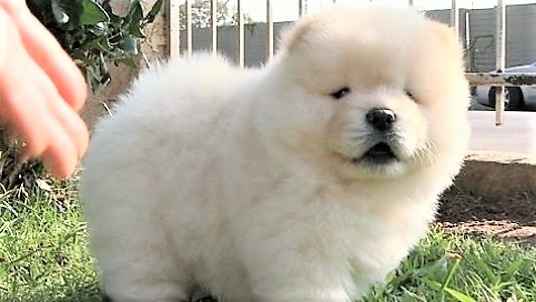 The Chow Chow puppy in this video is camera shy.  He seems to be running away from the camera, or hiding from it.  Chow Chow’s need to be socialized as early as possible.  They are naturally protective.  It helps if you invite guests inside your home often, so the puppy become familiar with people entering his home and be all right about it.

What kind of family is best suited for a Chow Chow?

This dog is better matched with older children who know how to show respect to a dog rather than younger children.  Chow Chow’s are not patient when it comes to being teased or treated with disrespect, according to some. They will retaliate if mistreated.  But when they are treated with love and respect, they will treat you the same way.  That sounds like wise guidance for any dog.

Chow Chow’s can be dominant, and can be aggressive with dogs of the same gender.  It’s best for them to be the only dog in the family.  Or if you really want a second dog, to raise the other one alongside the Chow Chow, and make the other one the opposite gender, and about the same size as the Chow Chow.

Do Chow Chow’s get along with other pets?

If you have a small dog or a cat in the house already, Chow may not be the best choice because their hunting instinct can take over.  Because Chow Chow are very protective of their family and property, it’s best to belong to an experienced dog owner who has time and energy to train and socialize the Chow Chow.  They can be aggressive.  In fact, before you adopt one, check your insurance policy first to verify if they cover Chow Chow’s.

As far as exercise goes, they only need moderate exercise.  Several walks a day, occasionally taking them for a run would be fine.  They are more active in winters.  Their coat can irritate them in the summer time.  If you have a yard, make sure it’s fenced.  And always walk a Chow on a leash because they can be aggressive to other animals and strangers.

If you enjoy Chow Chow videos, here is another one of a Chow Chow amusing himself.