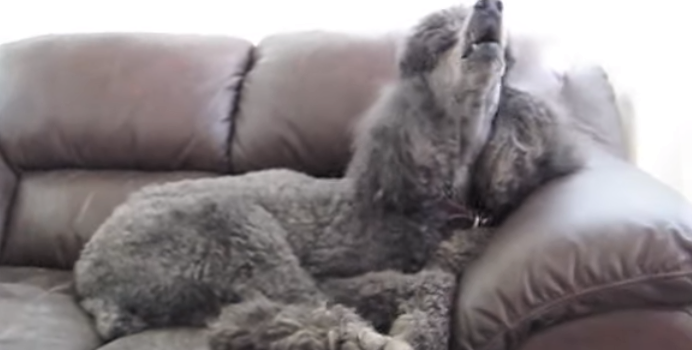 How cute is THAT?!!!  The dog in this video loves Andrea Bocelli’s singing.  In fact, everytime this song is played, the dog sings along.  And guess the name of this dog.   That’s right!   It’s Andre.  At this filming he is almost 12 years old.  Watch how at quite a few points of the song, Andre sings along.  It seems especially around the higher notes, Andre feels more drawn to them.

It’s wonderful that dogs also have their favorite songs they like to sing to.  Music uplifts dogs too. Andre could care less whether his singing is on tune or not.  He does it because he feels good doing so.  I was curious about dogs and singing, so I did some research.  In an article written by Stanley Coren for Modern Dog Magazine.com, he relayed a story that is both amusing and impressive.

Composer Wagner and his musical dogs

Dr. George Robinson Sinclair is an organist at the Hereford Cathedral in London.  He has a Bulldog named Dan.   Now Dan has exceptional musical ears.  Sinclair would take Dan with him to choir practice.  If anyone sings out of tune, Dan would growl at them!

Another story involves the famous composer, Richard Wagner, and his dog, Peps, a Cavalier King Charles Spaniel.  Wagner has a stool for Peps in his study.  When he was composing, he would sing a passage or play it on the piano, and watch the reaction of Peps.   Then he would modify his composition accordingly.

Wagner noticed that Peps responded differently to keys.  One key might get a calm wag, while another key would get an excited response.  When Peps passed away, Wagner was devastated, and found it hard to compose until he got another dog (the same breed).  Fips has a specially upholstered stool next to Wagner’s piano.  Like Peps, Fips was co-composer with Wagner. 🙂  You can read the entire article here.

Enjoy watching and listening to Andre sing along with Andrea Bochelli.  If you like this video, you might also enjoy this one.