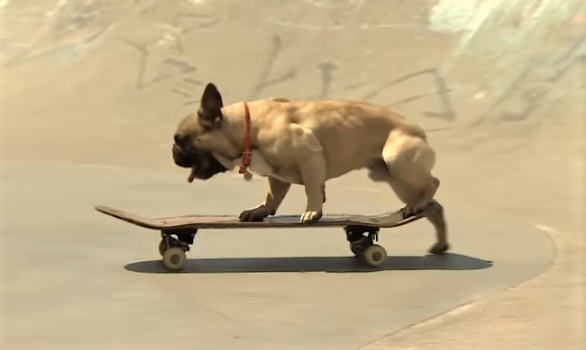 Is that passion or what!   Eric the French Bulldog skateboarding to his heart’s content.  Actually he taught himself to skateboard, say his parents Claire and Joel.  Eric and his parents live in London. Eric is 18-months-old at this filming.

One day, when Eric was just 5-months old, they went on a walk in a park.  There was a boy behind Claire with a skateboard.   Claire looked around and couldn’t find Eric.  The boy behind her lets out a yelp,”Oh my gosh!”  Eric had taken the boy’s skateboard and was rolling down the hill on the other side of the park.  Talk about free spirit!

As more people become aware of Eric’s natural talent, his fame grew.  And retailers got the idea that this athlete can help promote their sports gear!

The story of Eric the skateboarding Bulldog

Eric’s Dad, Joel, has been skating for 20 years, according to Jack Cummings on The Tab.  It is quite possible that through observation, Eric had soaked up the love of the game without his parents even realizing it, and one day–Boom!  He spotted the opportunity to get on a skateboard, and he’s been skating since.  His Dad was concerned at first, not sure if Eric’s legs were fully grown.  They make sure that Eric rests twice as long as his skating time.

He’s become a celebrity at the park.  People are taking photos of him.  Applauding him.  It’s not surprising that Eric has taught himself this sport.  He probably would continue whether there is applause.  The dog breeds who do well on skateboards are those with strong back muscles–such as the Bulldog family.  It helps to alter the board height for them so they can be “paddling” with their leg while on the board.   You can read more about Eric and see more of his photos here.

If you like this video, here is another video of athletic dogs for you!