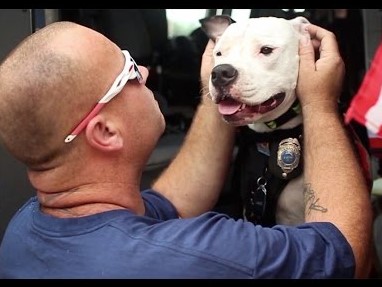 The dog in this video is now an honorary firefighter.  There is a loving story to this.   Jake met his current owner when Bill rescued him from a house fire when he was just a 3-weeks-old puppy.  After the fire, Jake needed time to heal, and needed a new home.  Without a second thought, Bill adopted Jake.

Jake had to go through some tender loving care with his injury.  After those treatments were done, he was still on antibiotics.  So even while Jake was still healing from his injury, Bill brought Jake to the fire station so he can administer the antibiotics to Jake.  The firefighters there said that even though the puppy was still healing from the injury, he was always so happy.  It’s just nice to have Jake around.  Good for morale.

How this dog  became an honorary firefighter

Jake is a wonderful  people dog.  You can’t walk through the door without him wanting to greet you. Truly, he has never met a stranger.  When Jake goes to the fire station, all happy and bouncing around, he automatically brightens up the day for the people at the fire station.  Bill and Jake are inseparable.  They won’t be apart for long, and Jake would start barking or whining for Bill.

The Fire Chief, the mayor, and the town administrator decided to make Jake an honorary firefighter because Jake captures their heart, and he is invaluable to the fire station.  Sometimes the firefighters go on very difficult calls, and when they return to the station, Jake is there to greet them, and they would all feel better.  There is just no end to how dogs help us feel better.  You may have heard stories of how dogs show their gratitude to those who save their lives. Jake is such a dog.

If you enjoy watching this heartwarming video, here is another video of a PitBull being very polite.