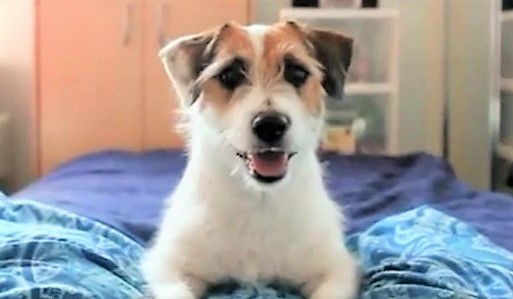 In this video, we get to enjoy watching Jesse the Jack Russell Terrier doing aerobics.  Really!  The exercises he does really do look aerobic.   Not only is Jesse a good actor, he would make a great aerobics instructor.  Just look at his enthusiasm.  Wouldn’t you feel inspired to exercise just watching Jesse?  He even uses the treadmill.  On his hind legs.   AND on his front legs.

The story of how Jesse the Jack Russell his owner

If you have seen other Jesse videos, you are familiar with the variety of skills that Jesse has.  In fact, Jesse has his own movie called A Doggone Christmas.  Dr. Anne Fawcett interviewed Jesse’s trainer, Heather Brook, in Small Animal Talk, about her journey with Jesse.

Heather was only 16 years old when she got Jesse for her birthday.  That’s because she asked for a Jack Russell Terrier.  She was so eager to have one that she saved her allowance to take care of all of Jesse’s care—including vet bills, food, and toys.  Talk about a responsible 16-years-old!

Heather met Jesse when he was only 3-weeks-old.  It was the day his eyes and ears opened.  Isn’t that synchronicity!   It was love at first sight.  Heather visited Jesse every week for the next 5 weeks until he was old enough to go home with her.

This Jack Russell taught himself a trick at 9 weeks old

Heather said that when Jesse was 9 weeks old, he taught himself to sit up and beg.  They started with the basic tricks like roll over, play dead, and shake.  Jesse picked up on every skill quickly, with a spark in his eyes.  He loves this.  Then they moved on to the advanced tricks.  Jesse actually thinks up some of the tricks all by himself.  Heather wants to make sure that Jesse has fun doing this.  This partnership is based on an extraordinary bond.  You can read the entire interview here.  Enjoy watching or doing aerobics with Jesse the Jack Russell.

If you enjoy this video, here is another one of Jesse helping around the house.