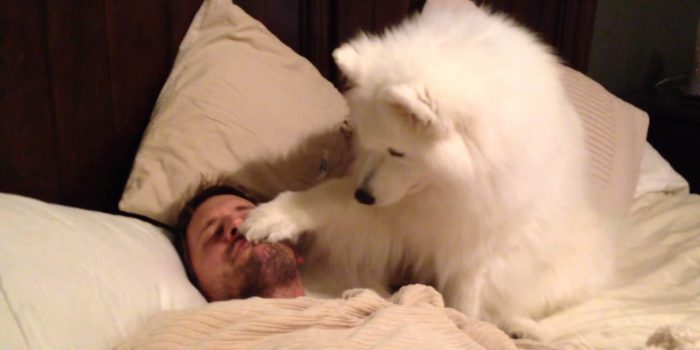 The lucky man in this video is starting the day with a Samoyed wake-up call.  The dog’s name is Lexi.  She very gently taps Dad on the shoulder because she wants to go for her walk.  Well, Dad isn’t ready to leave his comfy bed yet.  But he doesn’t want to ignore Lexi.  He acknowledges her, but doesn’t do what she wants.   So brilliant Lexi escalates her approach.   She taps Dad on the shoulder.  Politely.  Not like Garfield the cat.   Still, she does not get the response she wants from Dad.  As a last resort, Lexi puts her paw on Dad’s face!   Now that’s the move of a master strategist.

Samoyeds are very intelligent.  When they lived in the extreme cold with the Samoyede tribe long ago, they sometimes had to make decisions independent of their human family in order to take care of them.  It’s not surprising that Lexi comes up with the most effective approach in the video.

Sammies appreciate the love and loyalty of their owners, and return that loyalty many times over, according to Samoyed Club Of America.  They are the best playmates for children, and will be their guardian if they are ever in danger.

Samoyeds has a keen sense of how people feel about him.  He knows who really loves him, who dislikes him, who barely tolerates him, and he will return his love in kind.  Samoyeds can be encouraged to speak his likes and dislikes.  They use their paws and nose to talk to you.  If they want your attention, they’ll poke their nose under your arms.  And if you don’t give them what they want, they’ll poke harder.

This is an easy dog to shake hands with.  Even as a puppy, they are happy to offer their paws to you.  You can learn more about Samoyed here.   Enjoy watching Lexi wake her Dad up.