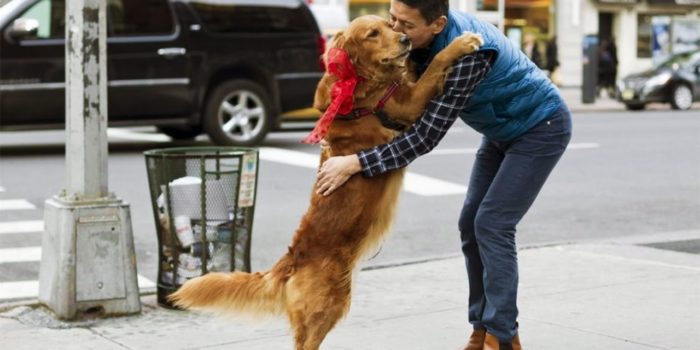 The Golden Retriever in this video gives hugs to strangers in New York City.  Her name is Louboutina.  She and her owner, Cesar Fernando Chavez, take 3 walks a day in their Chelsea neighborhood.  Even though the distance isn’t that long, the time it takes to finish a walk can sometimes take 2 hours.  Why?  Louboutina likes to stop and hug strangers.  Whoever she sense may want a hug, need a hug, and whoever is willing.

Story of the dog who hugs strangers in New York City

Cesar says she is a love bug.  He never taught her to hug, but he hugged her like he would hug a person when Louboutina was a puppy. Maybe that’s where she picked up this wonderful skill.  But the empathy part–sensing which stranger might appreciate getting a hug today–now that’s entirely a dog’s intuition.

Cesar says that Louboutina started holding his hands a couple of years ago.  (One of the interviewers shares that around Valentine’s Day one year, Cesar had just ended a relationship, and loving Louboutina must have sensed that he needed comfort.  All of a sudden, she wraps her paws around his hand, as if to hold his hands.)  Now isn’t that the most compassionate act!!!

From holding hands, somehow Loubie transitions to hugging.  When she walks with Cesar, she would stop every 2 or 3 blocks and hold his hand.  That transitions into hugging.  And then not just Cesar, but other people on the streets of New York City.  Lauren Steussy writes in the New York Post that lots of people write on their Instagram that receiving a hug from affectionate Louboutina has made their day.  Perhaps they have had a hard day.  Having this loving Golden Retriever reach out to give them love just helps the stress to melt away.   So far, Louboutina has given over 700 hugs on the streets of New York City.  In fact, fans from China has emailed them to arrange a meeting with Louboutina. Read the entire story here.