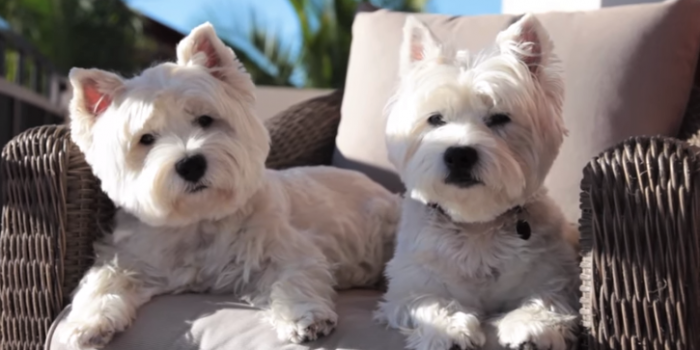 In this video, Pepper the Westie is leisurely enjoying her morning with sister, Britney.  Pepper is a West Highland White Terrier who lives in Brisbane, Australia.  Sister Britney, also a Westie, joined the family a few years ago.  Britney is a couple of years older than Pepper.  It is nice to have dogs around the same age to play together.  Their energy level is similar.

This dog is an ambassador for Pet Travel in Australia

Pepper actually has her own Facebook page, and is a celebrity in her own right.  Back in 2013, Virgin Australia launched the first frequent flyer program for pets, writes owner Leah Lorraine-Simkin. This was the first in Australia.  Pet owners can earn 300 points each time their dog or cat flies on the domestic network of Virgin Australia.  The loyal program searched nation-wide for an official Pet Ambassador.  Guess who won?  Yes, that’s right!  Pepper.  And the competition was fierce.

Leah shares on her website that as the Pet Ambassador, Pepper won not only the title, but also a photo shoot, a pet pack, and Leah got the 10,000 points for the frequent flyer program.  Since Pepper won that title, she’s been featured on Virgin Australia’s website for Pet Travel, got thousands more Facebook fans, twitted, and got in a magazine and a newspaper.  And now she has her own YouTube channel.  The life of a celebrity!

But at home, Pepper is down to earth. No formalities here.  She’s called Pep, Munchkin, Pumpkin, Peppie.  And she eats healthy too.  Her treats are strawberries and carrots.  She may be turning 10, but Leah says she still acts lke a puppy.  She is still hunting for lizards in the backyard sunbathing, eating strawberries, and taking walks with sister Britney.  Pepper, you know how to live!  You can read more about Pepper and Britney in Leah Lorraine-Simkin’s website.  Enjoy starting the day with Pepper the Westie and her sister, Britney.

If you enjoy this video, here is another video of a Westie figuring out how to get treats from a bottle.